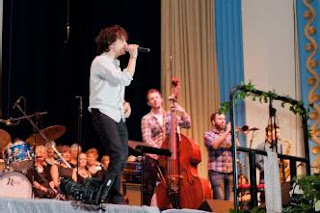 Photo credit: Avalon Imaging
Bath's extraordinary weekend of musical celebration, which kicked off with the glittering Picnic in the Park to celebrate the Royal Wedding on Friday, continued on Saturday night with an unforgettable evening to mark the diamond anniversary of one of the city's best-loved musical groups.
The Silver Ring Choir of Bath was formed in 1951 when its founder, Kelvin Thomas MBE, knocked on doors in Bath to try to encourage people to form a new singing group.
And 60 years later Kelvin, now in his 92nd year, was back at The Forum to see the choir he had diligently formed produce a fantastic performance to mark their anniversary. 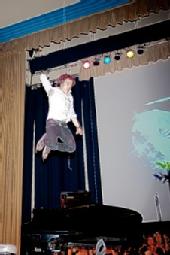 As well as being a night to treasure for everyone connected with the choir, it was also a special evening for the Cullum family.


One of the choir's most dedicated members is Yvonne Cullum, the mother of jazz superstar Jamie and his song-writing brother Ben.


To celebrate the choir's anniversary, both of them had agreed to write a song which was unveiled on the evening and produced a standing ovation from the 1,300-strong Forum audience......read more