Okay, where do I start telling you about that amazing Saturday night? First things first: the meet and greet!

We were not the only ones who were going to meet him that night, there were around 15 people (some of them had the M&G pass from the deluxe edition and some others had friends working at the backstage). Everyone was so excited! Vanessa, I, Gabriela (the other winner of the competition run by Natura Nós on twitter) and her boyfriend were the last group to enter the dressing-room.
Because there were so many people to meet him and because he was about to go on stage, it had to be very quick. I said "Hi, I'm Rachel" and he took my hand and gave two kisses on each cheek and said "Hi, I'm Jamie" like I didn't know lol! I was going to tell him I wanted one of his great hugs but there were so many things going on at the same time! And I was very much nervous too! Anyway, I asked him to sign my copy of The Pursuit, we took a picture together and he asked me what was the question I'd ask him (that was what the competition was about), then I said "Oh, it wasn't me who won, it was my friend Vanessa" and then she told him what was the question and he answered that he'd like to make a mix with songs by Seu Jorge or Milton Nascimento (Brazilian musicians). 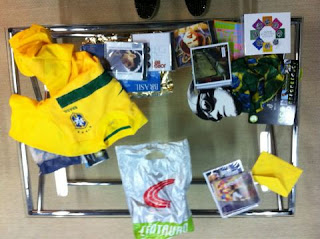 We gave him the presents and he thanked us so much for them :)  Check out Jamie's tweet about the gifts HERE!


Then everyone was talking at the same time lol! And when we were leaving I remembered that Romina had asked me to tell him that one of his big fans had come from Argentina to see him and he said that was really great and asked me to thank her for coming.
And that was it, we were rushed outside and had to say good bye.


He was so kind and thoughtful! I'm enchanted by his smile, his loveliness, his simplicity and modesty and by his awesome shoes! Floating up on the Cullum Cloud, as you put it ;D
Now, the show!
There were two stages at Natura Nós Festival, so the crowd kept moving from one side to the other to see the performances. But not before Jamie’s show. A lot of people refused to leave the Green Stage side and lose their good spots and go watch the performance that was taking place at the Blue Stage. Everybody was waiting in anticipation for the previous show to be over (and I’m telling you: never a show lasted so long!) and for Jamie to come up on stage and do his thing.


When Jamie’s band entered the stage we could hear the enthusiastic applause and cheers and when the men itself stepped out in front of us the crowd grew so loud it was almost deafening! He waved and bowed, then sat down at the piano and started working his magic.


He started with I’m All Over It and from the first note he owned the entire crowd! When he finished this first song the audience broke out in a non-stop applause! He said he remembered why he liked to play in Brazil so much and why he had to come back. He also told us that that was only the third time he had left home since his little daughter had been born.


After that came Get Your Way, with the groovy trumpet background melody, and the moment we were all waiting for: THE PIANO JUMP! It set the audience on fire and we kept clapping, screaming and whistling for a good while.


Twentysomething was next and Jamie’s jacket and tie flew off as he danced and swung from one side of the stage to the other.


That was followed by Don’t Stop The Music and then Next Year, Baby to which Jamie mixed some Brazilian rhythms and sounds.


These Are The Days and Mind Trick were very popular in Brazil when they were released, so a sing along was inevitable (Brazilians love to sing along!).


Before playing High and Dry Jamie told a story about a girl he liked in school and how she didn’t want anything to do with him until he sang this song to her. His rendition of it was mesmerizing! Also at this moment he asked the audience to wave their cellphones in the air and the effect was incredible! It was beautiful to watch!


Mixtape was so much fun!!!! It was very exciting to see everyone clapping, jumping and doing the Ooooo’s!


He was going to end the show with All At Sea, but as he was saying he had to go because there was more music to be played at that stage, a sonorous NO echoed through the place. So he had to play one more song and that was his fantastic version of Jimi Hendrix's Wind Cries Mary.

The energy was palpable and high right from the beginning of the show and never went down, not even for a moment! Jamie left us wanting more, loads more of him!!!!!


It was funny to read the Rolling Stone review saying that he got the same reaction as a boyband would have when he entered the stage, because Brazilians are know for being passionate fans, so if we like a musician we'll react like this it doesn't matter if is Justin Bieber, the Backstreet Boys, or Jamie Cullum, Paul McCartney or Pavarotti!


Anyway, it was a perfect night in my opinion and Jamie was by far the best performer in the festival! And that's not only my opinion! :)


Rachel asked me to point out that English is not her first language. I think, and I'm sure you readers will agree, she speaks excellent English and has no need to worry! Thanks for a superb and beautiful review Rachel!