On April 30th 2011, a concert was held at the Forum, Bath featuring the Silver Ring Choir with special guest Jamie Cullum. The choir's secretary, Ruth Bwye, told me how it went.


Your 60th anniversary show received rave reviews, congratulations! How did it feel to be performing to the choir's founder Kelvin Thomas on such an auspicious occasion? What did Mr Thomas think of the show?
It was really special singing at the Forum to celebrate our 60 years.  The fact that Kelvin was there made it that much more poignant, especially as we sang one of the many songs he arranged – Ar Hyd y Nos (All Through the Night) – which was always a favourite when he conducted our Choir.  He said a few words to the audience and got lots of applause.  Not bad for someone in their 92nd year.  I know that he very much enjoyed being in the audience, although the music from Jamie must have been a very new experience for him!
How often do you get to rehearse all together?
We rehearse twice a week.  We realise that in this day and age it is not always possible to make this commitment – and it is a commitment – but we do tell new members that they should attend at least once a week.  Having said that, we have a very strong nucleus who always come on the two nights.
What was the highlight of the evening?
I guess that singing ‘Silver’ was the highlight of the evening but it was such a tremendous pleasure to be with Jamie once again.  We have been fortunate enough to have him with us on previous occasions and he and Ben used to come and listen to our concerts – and these are held in many small locations such as churches and civic centres, etc. – before he was ‘discovered’.  Although, having said that, if a visit by him to Bath coincides with our giving a concert then he can quite often be found in the audience. [You can watch the performance of 'Silver' here]
Will you be including 'Silver,' at future concerts?
We will certainly be including ‘Silver’ in our concerts, and in fact have already done so.  Without Jamie’s presence (wouldn’t it be nice to have him there all the time) we have the men singing the first verse and the ladies singing the second.  I can see it being in our repertoire for many years to come.
What's next for the Silver Ring Choir?
As far as the future is concerned, as I said, we are off to Germany on Tuesday to meet with a Choir we first exchanged with in 1961 so whilst the our Choir is celebrating 60 years we are celebrating 50 years with them.  Many friendships have been formed between the two Choirs over the years and it will be good to meet up with them again.  As far as this year is concerned, it has taken a lot of planning and we have other things to do before we start deciding what to do in the future.  One of our aims would be to try and encourage younger people to join with us – and that is not an easy task!
And the last word goes to Jamie's mum Yvonne...
You and Mr Cullum must have been very proud of both the choir and of Ben and Jamie of course! What did it feel like to be singing on stage with them all together?
There’s no question as to how moved and emotional and proud I was to be singing on stage with both my boys at this important anniversary of my choir, but moreover that scary jump Jamie executes from the piano during The Wind Cries Mary is even more heart stopping watching from just behind him on stage. There was a naughty look in his eye and I’m sure he leapt even higher on purpose!
Thanks to Ruth Bwye and Yvonne Cullum for your comments! 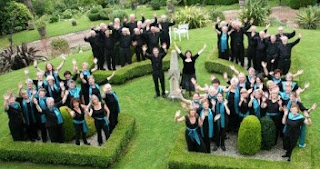