Interview: Julian Velard...in his own words. 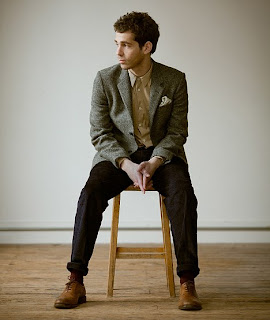 Julian Velard is a busy guy at the moment.
He's been out on tour in the US and flew back to London last week to promote the second single 'Sentimental' from his latest album 'Mr Saturday Night'.  Before he'd even unpacked his suitcase, he went straight from the airport to play The Station Sessions with The Guillemots at St Pancras. This was followed by some national TV and this Thursday sees Julian's biggest headline show to date at Bush Hall.
I managed to pin him down to answer a few questions for the blog!


Your new album 'Mr Saturday Night' has been out for a couple of months now. What's been the general consensus?
It seems like people are digging on it. It's always a little bit scary when you put something new out there. You never know if everyone's gonna hate it, think it's a big let down from the last record. Thus far I haven't heard many bad things. Most importantly, people think I look handsome on the sleeve ;)


What is your favourite track from Mr Saturday Night to perform live at the moment?
Either Me and My Mirror On A Saturday Night or Another Guy's Song.  Between the two it's the full scope of emotions. I go from being the preacher on the mountaintop to the dejected lounge singer. Feels great to sing both live.


Going back a few years, you were 'discovered' on Myspace. It's still very hard for musicians to get heard, despite the technology to make everything so instant and more personal. You are very active with social media and interact with your fans freely. How important do you feel it is to bridge the gap between artist and fans?
I think it's crucial these days. Your fans are your tribe. They are the ones going out there and turning people on to your music And with all the noise, the best (and maybe only) way to get people's attention is word of mouth. You need people to feel connected to your music and you as a person. It has to be personal.


Can you describe your music style in a sentence?
Ninja Laser Boom Bap Sad Birthday Party. Wait that's not a sentence really. Or a very grammatically incorrect one.

Who was/is your musical biggest influence in life?
That's tough. I have so many reference points that I draw from. I feel everything I ever listen to somehow gets lodged into my cortex and when I write I spit them back out transmuted through my voice and piano. I try to get as much in there, like a super rich chocolate cake.

If I had to pick one it would be main teacher in collage, jazz saxophonist and composer Yusef Lateef. Though his music is completely different than mine, he was the one who spurred me one, truly encouraged me to find my own voice musically.
Is songwriting a continual process for you? Do you get ideas all the time or do you have to lock yourself away in a studio to write?
I don't get many musical ideas away from the Piano, they only come every so often. However I do get lots of ideas for lyrics. Sometimes when I'm walking down the street, if I'm on a roll, I can think of 3 or 4 opening lines for songs in a block. That's like 80 songs a mile! I'm a songwriting cheetah!


You've mentioned you are writing a musical. Can you give us any hints of what it is about? If there was a musical called Mr Saturday Night, who would you like to play the lead role (apart from yourself!)?
I've been toying with idea of writing a musical for years. I still haven't found the right structure, but I know once I do, the songs will starting pouring out. I'd love to work with Nathan Lane as a lead. He's supposed to be a pain in the butt though. Can Jon Hamm sing?


Are you a songwriter or a performer first?
To me they are one and the same. I write so many of my songs by imagining how they would be performed, how they fit into my character on stage.


Do you have any special pre-show preparations? How often do you practice piano?
Don't eat too much. Makes me sleepy. A shot of vodka is nice. I try to play everyday.


How many bow-ties do you own?
Four.


What gear do you use for your live shows?
Yamaha CP-33, Nord Electro 2, Roland SPD-S drum sampler, and a bunch of foot pedals.


Will Hall & Oates be coming to London with you?
Of course.

Julian plays Bush Hall, London this Thursday June 23rd. For your chance to win tickets to the show, Jazz FM are giving away 5 pairs! Enter their competition here! Closes Wednesday at 1pm. There may still be tickets available to buy here. 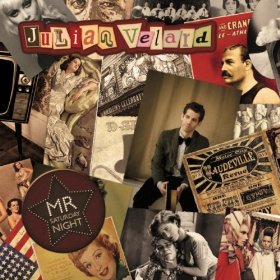 Check out my album review here
Visit Julian's Website and be sure to sign up for exclusive content, including free weekly downloads!
The video for new single 'Sentimental'

You can read previous interviews in this series here with more to be added soon!
Posted by Unknown at 09:22