Interview: Kyan Kuatois...in his own words

The next in my interview series is with singer-songwriter and pianist, Kyan Kuatois. 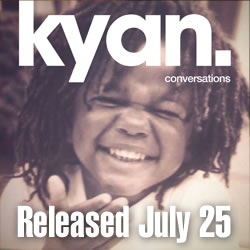 “Conversations” - Kyan's debut album, is released on July 25th and is a diverse collection of songs acknowledging his constantly evolving and maturing songwriting skills. “I write as an instinctive reaction to whatever has affected me that day” - this is reﬂected in his emotionally open and honest lyrics which make up new, immediate and sometimes urgent songs.

Reaching the semi-ﬁnals of Sky 1ʼs “Must Be the Music” in Summer 2010, Kyan aroused interest and encouragement from music industry professionals such as Dizzie Rascal, Darwin Deez and Jamie Cullum who enthusiastically declared “that was a real moment for me, we could teach each other some stuff” and “Britain needs talent like you”.
I was delighted to meet Kyan at Jamie's recent London gig and he was happy to answer a few questions.
We were first introduced to you on last year's Sky 1 show 'Must Be The Music' when you wowed the judges and the public with your own composition 'Clouds'. How did that experience affect you personally and by extension, your career?
It was a fantastic experience and a great learning curve. Firstly, having impressed people such as Jamie Cullum, who is an incredible pianist, singer and performer; was a great confidence boost, and a very special moment for me, especially when he came back stage to express his feelings personally.


I also had a crash course in media training, working in a high pressured environment, experiencing what it was like to be famous in a small way, and playing live to hundreds of thousands of people...wow it was certainly an experience, but most of all it taught me to be patient...I've never wanted a tv show, or anything other than determination, hard work, and hopefully talent and originality to be responsible for my success. It clarified for me, that although it gave me mass exposure, and a platform, I wanted to use that platform to build my fanbase, learn my craft, use all of the skills I had learned, and turn them into something long term.
Your debut album 'Conversations' will be released in just a couple of days on July 25th. How are you feeling about it all?
I'm really excited about the release of the album; it was important for me to have something completely "Kyan," something I had written, produced, created and released one hundred percent by myself. It was an important exercise for me to really discover who I was, to pick through a catalogue of over a hundred songs, to write new material, and bring continuity and cohesion within the project.


I really hope people like what I've created as much as I've enjoyed creating it for them.
The album art is a photo of you as a child - how old were you there? Is there any story as to why you used that photo, or is it just because it's cute?!
I can't remember how old I was; I'm useless at that kind of thing! Pretty young though!


The reason behind using that photo, is because it's important for me as an artist to be approachable, and for the "Kyan Brand" to be reflected in everything I do. I thought considering the nature of the music, and of the purpose of the project, having a posy, nicely lit, professional photograph of me would give off the wrong impression. For me it's all about the music, and when I was sorting through some old photos, that one just jumped out at me at being able to reflect the excitement I feel when I write, and the purity of nothing being forced and manufactured.
What are your earliest memories of music? Who was your biggest influence when growing up?
My earliest memories of music were listening to typical radio pop for years and loving it...S Club 7 are amongst one of my former favourites! haha.. But then one day I heard something strange, something different and alien from what I had heard before...Something I loved, and that I really connected with. I was about thirteen at the time...The music was Stevie Wonder, and I haven't looked back since! 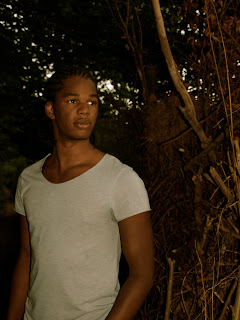 At just 21, you demonstrate great maturity in your art, which is refreshing to see! You have been working very hard to get your music heard, with very positive feedback. How does it feel to be compared with the likes of John Legend?
Thank you it's great to hear that, I'm glad that comes across in the music.


People will always make comparisons with other artists, it's human nature, it gives people a reference point, and allows them to understand the artist more.  I have always been a fan of John Legend, and he is a very successful artist with great credibility, he's sold millions of albums, and has already had a relatively long career, so it's a massive compliment.

I understand what people reference as the similarities in our voices and I'm humbled by it; I do however see myself as a very different artist to John Legend, I think our music is very different and I fully intend on becoming not the next John Legend, but the first Kyan :)

At this point in your career, who would you most like to work with?
John Mayer is one of my biggest influences, I think he is an incredible singer, an amazing songwriter, and guitarist. I would love to work with him. I had the great privilege of playing with his guitarist Robbie McIntosh recently for some of my youtube videos with a full band, it was an incredible experience. Working with Mayer himself would certainly be a great next step!
Describe your music in 3 words.
Honest, Soulful, Pop.
Which usually comes first - Melody or lyrics? Can you explain your creative process in writing your songs?
If you are a mathematician, you know how a formula works and why it works, if you are a chef, you know ingredients to combine, and you know what you are aiming for...However, for me when it comes to music is such an emotion fuelled process, that I write when I feel something, sometimes it works, sometimes it doesn't...When I write it feels like the song is already written, all I have to do is articulate it into words and notes. Because of the nature of the process, it can make it really difficult; sometimes I spend hours just trying to think of one word...I used to write two songs a day, every day...But as I've grown, and developed and learned more, I write less often, and I try to let the songs come to me. A lot of my songs come through conversations with my friends (hence the title of the album), a line they say, or an interesting angle, or way of saying things is usually a great starting point for me.

What gear do you use?
I use Roland FP7 keyboard, SM58 microphone, a Mac Book Pro, and Logic 8. That's what I made my album Conversations on. However, the gear I use is more out circumstance than choice. Hopefully I will get myself to a place where I can have a 9ft Steinway Concert Grand piano, an orchestra, and a full band..That would be my gear of choice!
What is the best piece of advice you have received so far?
It's not so much advice, but I think the thing which has helped me most is that I've had musicians I really admire and who are incredible, celebrities, people in the street, and on the internet, my friends, my family all saying the same thing...That they believe in what I do, and that they think I have something different, and the potential to go all of the way. I intend on working my hardest to hopefully achieve that potential.
What are you listening to on your ipod at the moment?
The same thing as the past ten years; Stevie Wonder!
The last live gig you attended?
Jamie Cullum...one word...Breathtaking!
Aside from music, what other amazing talents do you possess?
Ha, wow really setting me here...I used to play National League basketball; it was a great passion of mine, and what I wanted to do, I still play from time to time...I used to do a lot of acting, adverts, featured parts in tv shows...I have recently over the past couple of years discovered a pasion for cooking, which is really useful because I love to eat :P I don't know whether I'm amazingly talented at it or not, but luckily my best friend really loves the food I cook; so that certainly helps!
Once the album is out, what's next for you?
I've got a series of gigs lined up in London, that will be announced on my Facebook and Twitter. Hopefully everyone will love the album; because I'm really looking forward to going out and playing all of my stuff to people...I've been developing, recording, and doing youtube videos for a while now; but it's definitely time to go and try them out with a band.
So, fans can pre-order 'Conversations' before July 25th for FREE! What do they need to do?
They just need to go www.kyanmusic.com, Click on pre-order, and follow the really simple instructions. A few clicks, and it's yours !


~
Thanks to Kyan for taking time to chat! All the best for the new album!

Watch Kyan perform his original song 'Clouds'
You can read previous interviews in this series here with more to be added soon!
Posted by Unknown at 15:04