Silda Jazz Festival in Norway celebrates its 25th anniversary this year and beats the big drum with an opening gig with Jamie Cullum at City Hall on August 10th. 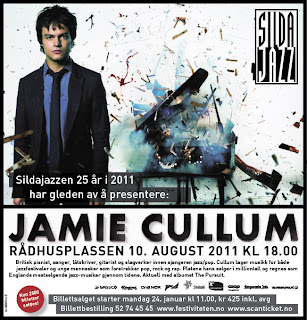 Listen to a Radio 102 interview with Jamie broadcast on August 3rd here
Jamie Cullum talks about his close ties to Norway and Norwegian music, about Amy Winehouse, how much he loves the song written by his brother Ben and an update on the new album!
Posted by Unknown at 23:42