My July traincation bound for Switzerland (compliments of Global Cool) kicked off with my first trip on Eurostar from London to Paris. I always seem to set off the security alarm, so had to endure the obligatory body search and handbag emptying ritual. What I had managed to squeeze into my bag was quite impressive and it was most amusing watching the security guy trying his best to repack it. My time was well spent telling him the reason for my trip and of course, all about Jamie Cullum!


After a brief stop in Paris, our journey continued on TVG Lyria to Bern, Switzerland in first class, which is definitely the only way to travel! Speeding through the French/Swiss countryside, we enjoyed complimentary meal and drinks, served by the sweetest guy from Belgium who reminded me of Hercule Poirot. 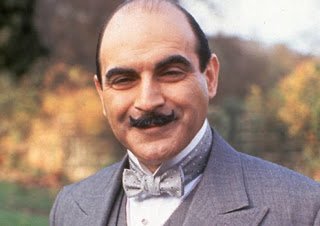 Arriving by train in the centre of the city made a nice change from flying, when after landing at the airport, you usually have to travel another hour. Thumbs up for train travel! After negotiating the Bern tram system without too much trouble, we found the way to our accommodation. 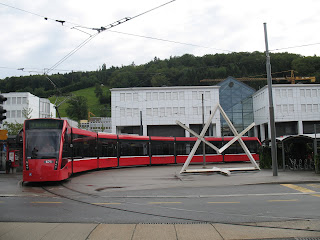 The four day festival was located on the Gurten, which overlooks the city of Bern. Thankfully, there is a little train 'Gurtenbahn' to take you up the mountain! After exchanging our tickets for wristbands, we headed to the Sleeping Zone to set up our tent. It soon became evident that space was not something we would have much of as we became lost in a sea of tents. But what a view! 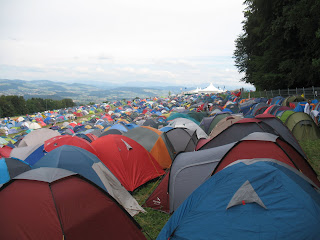 Back down the mountain to have lunch by the fast-flowing River Aare. Such a beautiful colour, apparently due to minerals. I am told on summer days, you can often see lots of people drifting past in the river.


Time for the music festival! Noah & The Whale were playing the Zelt Buhne stage that evening. They've had a lot of radio play in the UK so I was curious to see what they could do live.

The Script were up first. The show was okay, the crowd loved them. Frontman Danny came down to the barrier for a couple of songs, and ended up climbing over into the audience for a walk-about, sending security into a panic.
After managing to get a touch of sunstroke, it looked like I'd end up missing the show. Somehow though, as soon as Jamie bounced on the stage with a smile, I felt a lot better!

Jamie didn't disappoint. As always, he kept the show interactive throughout and the reception the whole band received was amazing.


I took a bit of video before being told off by security. After that, I managed to get a couple of sneaky clips! 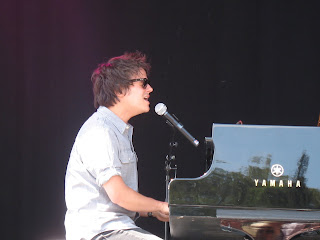 During All At Sea, Jamie gave us a taste of Space Cowboy by Jamiroquai, which was fitting since they were sharing the stage that day!
Space Cowboy

Even the festival security staff got into the swing of things as you can see in this video:
During the 'I Feel Fine' chants, Jamie invited Mr Tree to sing 'I feel fine!' Bob the Tree endured the heat in this tree costume and became quite a celebrity after his mention from Jamie! After I spoke to Bob, he was taken off to be interviewed for the festival. 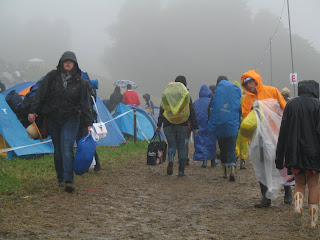 By the afternoon though, the rain eased and it was time for a walk along the cobbled streets of beautiful old Bern, taking in the architecture. Our route took us to the Bear pits by the river.