Interview: Anthony Strong...in his own words. 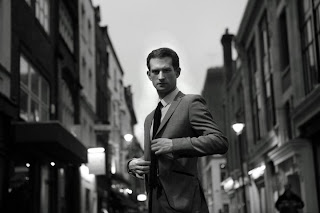 Hailed by none other than Michael Parkinson as “the next big thing”, pianist and singer Anthony Strong brings us old songs with a contemporary feel and new songs that sound like we already know them.  We talked to Anthony as he gets ready to launch his second album in London this week.


When did you first discover your love of jazz piano?
We didn't have a piano at home when I was young  and so I used to play constantly on my grandparents piano whenever we visited. I loved playing it so much it was eventually moved from their house in Wales to ours in South London. I took basic lessons and messed about on the piano, avoiding my practice and trying to play nice chords! I hadn't really heard a jazz record by this point, but I kept playing by ear and took my exams. At music college I studied clarinet and was given the option to study a second, even a third instrument. Jazz piano was an option, as was composition. I took both and fell in love with jazz, specifically jazz harmony.

What was the overall sound you were aiming to achieve with your first album, Guaranteed?
I wanted to release an album of mostly original songs that people would listen to and not be sure if they were standards or originals.  People do ask me "on the album is this, or is that, song an original?" and it always makes me smile, because there's actually only one cover on the first album.  I love the American Songbook - the melodies and harmonies in those old songs, but also the sentiment.  The songs have real style to them, almost a kind of classiness.  With the first album I hoped to borrow some of that sentiment and modernise it a little. Perhaps it's a generation thing - maybe when I have kids they'll be calling Take That vintage or retro!

Do you collaborate with other people, or do you write both the music and lyrics yourself?
I wrote most of the first album with my long-time friend, Guy Mathers. Guy has always been amazing with words and poetry and we used to play a bit together on the piano so I knew he had a good grasp of standards, their harmony and forms. Guy's lyrics are so clever that you only ‘get’ some once you've read them.  I also wrote a song with my best mate Jamie Pullen which was lots of fun.   In one night we came up with the song "Guaranteed". Instantly, I knew this was the title track of the album - it was snappy, feel-good and had a really positive vibe. I wrote "I Wanna Be Me" on my own but that was just chance really.  Generally, I'm quite a lazy person and whilst the music flows freely, I have to work harder on the words - that's why I like to leave it to the professionals!

Where do you get the ideas to twist old songs into the fresh new sound on the upcoming EP “Delovely”?
Harmony usually plays quite a large factor in my choice of standards - sometimes I'll know what I want to do instantly and other times I'll sit at the piano, playing through different songs and trying new things till I get something I like. Some of these songs I've played a lot over the years and whilst I've never done an arrangement as such, I'll have a way of playing them which has evolved into an arrangement. Occasionally, I'll be inspired by another record and want to recreate a particular sound or vibe, and sometimes it's just a case of trying to find a new or original way of approaching the song.

Do you think there’s a new audience evolving for music from the 1930s and 40’s?
I think the American Songbook will always have its fans - it was a golden era and whilst it may not be mainstream at the moment, I think there will always be an audience for it.  Artists such as Jamie, Michael and Amy (no need for surnames!) also did their part in giving those great jazz standards the exposure they so rightly deserve. They're the masterpieces of yesteryear and sound just as relevant today as I'm sure they did back then.

Are you a jazz or pop musician?
I'm probably somewhere in the middle. I love a good pop hook, but I also studied jazz at music college. I guess, like Jamie, I'm trying to popularise the songs from the 1930's and 40's and they are often (and not necessarily always correctly) labelled "jazz" records. With regards to jazz I'm not by any means a purist, in fact some of my friends wouldn't call my music jazz at all, they'd call it pop. I'm planning on winning over both the jazz and pop camps!

What was the creative idea behind the video for “Cheek to Cheek”?
We were set on a slick, sharp, urban feel for the video.   Originally, we shot a lot more of the video on the underground, but we dropped some of this footage and went for a more 'performance' approach to the start of the track. If you look closely at the posters on the side of the escalator, we replaced the modern ads with posters of jazz legends - check it out, there's one of me too!

Tell us about your connection with Jamie Cullum?
Jamie and I have more than a few mutual friends who play together and I actually took over an old band he used to play in. I've also done lots of gigs with Chris and Tom from Jamie's band. We properly met for the first time last year on Sky One's "Must Be The Music". We bumped into each other and he said he'd "heard about me" (which I was massively overwhelmed by) and I thought, "I've heard a little about you too"!  We met again at Cheltenham Jazz Festival, where he managed to catch some of my gig and I went to his solo gig, which was impeccable. We hung out after the show, talked some more about music and got on really well - I'm hoping to collaborate with him in the future.  At first it was a little like meeting a celebrity but Jamie was so gracious and friendly, I instantly moved him in to the 'muso' category - he's an absolute legend, a gentleman and quite possibly the UK's biggest talent.

In a recent interview you said you were planning to take over the world - so what’s next on your list?
I really enjoyed recording the new EP, the video has had a great response and we've got a UK tour coming up shortly. In terms of the future, I have another video on the way in the new year, possibly another EP - maybe even a second album.  We're in talks with labels at the moment, so who knows? A bigger UK tour is being planned for 2012 as well, so if you missed me this tour - I'll hopefully see you next year!

Anthony launches the EP “Delovely” at Pizza Express in London on 27th September followed by dates across the UK.  He is also currently understudying the role of Jerry Lee Lewis in Million Dollar Quartet at the Noel Coward Theatre, London.  Find out more, listen to and watch Anthony at www.anthonystrong.co.uk
~ Sandra Nicholls-Marcy
join in the conversation on Twitter @pecangirl
Big thanks to Anthony for the interview and to Sandra for another excellent post!
Read All Things Cullum's Introduction to Anthony and why not check out Sandra's previous guest posts for this blog here and here


You can read previous interviews in this series here with more to be added soon!
Posted by Unknown at 22:33