Backtrack to The Pursuit: The First Single

We continue backtracking on the success of Jamie's last album, as we countdown to Jamie Cullum Day on November 9th, marking two years since The Pursuit was released.


Remember the first single from The Pursuit?

Released November 2nd 2009
“I'm a huge fan of Wes Anderson films particularly the little short he made, Hotel Chevallier, which was before Darjeeling Limited. I love all of his films. I thought this odd, happy little weird song would benefit from a quirky video shot like Wes Anderson, and framed like Wes Anderson with a colourful cast of characters. We hired a team of very odd looking extras and there's lots of stuffed animals – a stuffed crocodile and a stuffed squirrel.”

Jamie himself developed the video's odd narrative which finds him as a bell boy in a strange hotel:

“I'm trapped in this kind of party where no-one's moving. When it comes to the chorus everyone starts to move. And there's this couple who are just in their underwear, trying to find their clothes and each other. They're trapped in this kind of Stanley Kubrick meets Wes Anderson nightmare in Cliveden House. The whole video makes the every day seem stranger than it already is.” 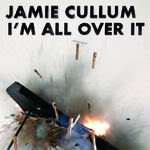 'I'm All Over It' is an infectious pop track written by 's favourite jazz man himself. Be warned, you will catch yourself humming this tune throughout your day. - 991

A bit of trivia on the single:
Behind the scenes at the video shoot:
Vodaphone advertisement:
What did you think of the song and video for I'm All Over It?
Leave your comments below or tweet me!
Read about Jamie Cullum Day and how you can get involved here
Posted by Unknown at 19:11