After a brief sabbatical and in time for spring, Friday Roundup is back! If you've continued checking in on the blog, you will know that Jamie is currently in the studio busily writing the highly anticipated follow-up to The Pursuit. The word was it would be ready early 2012 but there's no news as to it being finished just yet. I guess you can't hurry genius and we fans are happy to wait!


So what else has Jamie been up to? He's been busy working on other projects, notably a song he wrote with Wayne Hector and Steve Robson is the German Eurovision Song Contest entry, to be performed by Roman Lob. The contest takes place in May. I've not watched the ESC for years but may need to make an exception, at least for the German entry! What do you think of the song? Watch. The jazz maestro has also been in the studio with hip hop duo Rizzle Kicks. 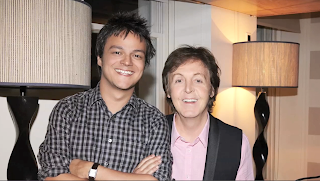 His radio show delights us on a weekly basis, featuring interviews and live sessions from the likes of Nigel Kennedy, Carmen Lundy, Robert Glasper, Get The Blessing and Paul McCartney. Watch Jamie talk about working on the show here. While we're on that subject, the countdown is on to the second anniversary of Jamie Cullum on BBC Radio 2, so join with fans from around the world online for a listening party on Twitter and Facebook during the show on Tuesday April 3rd! I've got some prizes to giveaway on the night. Find out more here.


Jamie is Guest Director for the third year running at Cheltenham Jazz Festival. Whilst he isn't performing a show himself, he is on the bill as special guest for what promises to be a seriously cool collaboration with Mr Gregory Porter, and there is talk of a special duet. You may still be able to get tickets but don't hang about! Jamie isn't touring this year so opportunities to see him sing live will be few and far between.


Not only does Jamie take over the airwaves on Britain's biggest radio station every Tuesday evening, he also has a weekly spot called Jamie's Jazz Mags on 6 Music's Jon Holmes Show every Saturday and this week, he even popped up on BBC Radio 1. Check it out!


Last Friday, Jamie was in Bristol to record a special show for BBC Radio 4's Desert Island Discs in front of a live studio audience. The programme will be broadcast this Sunday March 25th at 11:15. Watch this video clip from the event. BBC Music Magazine covered Jamie at the event this week.


BBC Radio 2 ran a special on Dudley Moore, with a contribution from Jamie. It is on listen again until Monday.


Englishman in New York - Ben Cullum has had a busy week, performing on stage with Gavin Creel in NYC at the album launch gig. Ben co-wrote and produced Gavin's latest solo project 'Get Out', available on iTunes and Amazon now. Ben's also been working with Project Alfie and Wakey Wakey.


Blog favourite Gregory Porter released his second album on February 13th and the reception has been amazing! He is currently on tour in the US and you can catch him across the UK when he goes out on tour with Jools Holland. Join the Gregory Porter community on Facebook for all the very latest! How would you like Gregory to sing to you in your car? Watch this!

'All Things Cullum' climbed to #56 in the most read music blogs at Ebuzzing. Also, @jamiecullumfans celebrates it's third anniversary on Twitter today so follow me there!


Catch up with previous Friday Roundups here
Posted by Unknown at 12:44