In 2003 a small committee was formed to organise a one off fundraising Black Tie Jazz Dinner to help raise funds for essential restoration work on St. Bartholomew’s Church in Orford, Suffolk. A marquee was ordered, menus fixed, 250 tickets sold and a little known singer/pianist booked to entertain. Unfortunately, shortly before the event was due to take place, the little known entertainer hit the big time and had to pull out of his commitment in Orford.
The event went ahead with the charismatic antipodean Victoria Newton proving to be a worthy replacement with her Latin American influenced performance encouraging the diners to work off the calories after dinner and give generously to the raffle.


To make up for the cancellation the original singer/pianist offered another date and agreed to perform at a Picnic Jazz event later in the year in the gardens of a large house in Orford. As a result, Jamie Cullum was responsible for launching an event that has been repeated every year since then raising funds for local causes. Picture the scene, two hundred and fifty people relaxing in the gardens of that large house on the river near the coast in Suffolk in 2003. The sun is shining; the crowd is enjoying a variety of picnics with wine and Pimms and there is an air of gentleness and peace when a charismatic young man begins to sing on the sound stage to one side of the gardens. The audience is immediately captivated by the pureness of his voice and the professional way that he moves from song to song with an ease belying his 23 years. By the end of the afternoon Jamie Cullum has the audience eating out of his hand and it is obvious that he is destined for big things. Although he was still only 23 that first event demonstrated that young master Cullum was a supremely talented musician who could enchant an audience with his keyboard skill, a powerful well balanced voice and a confidence beyond his years. It was obvious that we had seen the early stages of what has now become a well deserved professional career.


The success of the two events in 2003 encouraged us to make an agreement with the owners of the venue to promote a picnic jazz event every July. With a capacity limited to around 300, and now in its ninth year with the church repairs completed, the event has gone from strength to strength, becoming a major highlight on the social calendar in Orford but has still retained its relaxed, quintessentially English appeal of Pimms and picnics in the garden. The high standard of the performers and the sound crew has continued to attract appreciative family audiences to help raise funds for local good causes, as well as attracting jazz lovers from further afield. Its popularity continues and when the house in Orford was sold three years ago, the new owners readily agreed to continue to host the event. 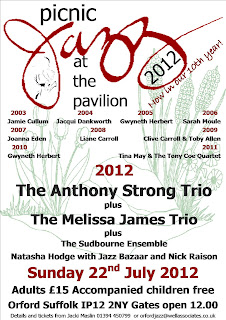 Picnic Jazz at The Pavilion 2012 on Sunday 22nd July will be the tenth event with The Melissa James Trio and The Anthony Strong Trio headlining and support from four musicians from some of London’s Symphony Orchestras performing as The Sudbourne String Ensemble and playing jazz variations of tunes from the shows, talented local singer Natasha Hodge with Jazz Bazaar and Nick Raison.


Without the early success in 2003 with Jamie Cullum proving that good music in small surroundings can be successful in providing an enjoyable afternoon whilst generating funds for local good causes, we would not have been able to support many worthwhile projects which include the provision of musical instruments and music tuition for the local infants’ school.


Tickets are available from Jacki Maslin 01394 450799 or orfordjazz@wellassociates.co.uk


~ Thanks to guest blogger Roger Hipwell for this interesting information on Jamie's involvement with Orford. Be sure to get your tickets to this year's event on July 22nd with All Things Cullum  favourites Anthony Strong and Melissa James!