Jamie Cullum was a guest on BBC Radio 2 on Johnny Vaughan's Swinging Session this evening. 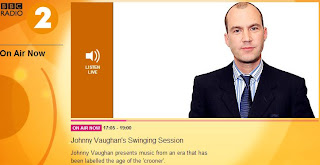 If you missed it, listen back again later here. Jamie is on from 17:15.

Here's the transcript from the interview:


Johnny - You play lots of different types of music these days. A lot of people see you with the swing thing which is why you're on the Swinging Sessions here. But you play many other kinds of music. Take us through the list

Jamie - I got into swing and jazz music through listening to hip hop, dance music and sampled music.  I didn't really get to jazz till I was 15 or 16.

Johnny - I love that, I didn't really get to jazz til I was 15.  I think a lot of people see that as quite forgiveably early!

Jamie - It is early. But a lot of people think I was listening to jazz from day one.  I didn't really start playing until 17 or 18 and a lot of the musicians I worked with were listening from day one. My first jazz records were heard off the back of A Tribe Called Quest record, from a sample as it were. Previously to that, I was playing in rock and pop bands. Kurt Cobain one week, Jimi Hendrix the next. A lot of pop music, I loved Go West, Housemartins, Pet Shop Boys, Blur, British pop bands.

Johnny - When did you start focusing up on swing, when did that become the thing?

Jamie - I was much more interested early on in playing the piano. I wasn't singing at all when I started playing jazz, I was singing rock and stuff like that but mainly back up vocals.

Johnny - You were a backing rock vocalist? That's quite a confession!

Jamie - I was. Because I didn't have the confidence to be standing in front of a band. I just wanted to play piano so I played stuff we're talking about, I got into by listening to the Charlie Parker instrumental versions. My first How High the Moon was Charlie Parker, it wasn't Ella Fitzgerald, it wasn't Frank Sinatra, that all came a lot later. And even before that it was Harry Connick Junior and even then it was his piano playing first I was interested in, it wasn't the singing, vocal side of things until a lot later.

Johnny - So were you playing on piano, maybe singing alone, someone hears you sing and it's like a film, they say maybe you should be out there? Who's that singing upstairs with Jamie? It is Jamie!

Jamie - Sadly, not entirely like that, although I had started to sing a little bit.  I remember I had this a piano bar gig near where I lived with my mum and dad. I would play these eight tunes I knew for four hours over and over. I'd try and learn a new song every week. There was this one tune I knew from a Harry Connick Junior album, Do You Know What it Means To Miss New Orleans. I couldn't play the melody, so one day I just sang it because I was bored with playing Summertime fifteen times. I didn't know the notes for the melody on the piano, I knew the chords, I thought I'd just sing quietly, there was no microphone, no one there. and the person who was running the bar came and said 'Er no singing thanks. We just want you to play piano. It's too distracting.'  A guy I was playing piano for in a local band in Swindon with, a guy called Ray Butt, an amazing jazz musician who lives in Swindon who's still in control of the local jazz scene there, he heard me singing, said 'hey! You should definitely do more singing, there's no one young and playing the piano and singing that kind of stuff, certainly in this area.'  He gave me a few tunes to learn and I started doing more and more. Then I heard this guy Kurt Elling sing, I heard him sing a snatch of something, and then I heard someone I wanted to model myself on. He's more from the jazz intrumentalist side of things, not really a crooner.
(clip of Kurt Elling)


Johnny - You're known as a singer/pianist who's brought swinging songs to a whole new audience and also delighted the old school. Was that your intention, was that part of the mission statement, to spread the word of swing?

Jamie - No. I didn't have a mission at all, in fact, I felt quite allergic to that  as it was given to me early on. I Get a Kick Out of You and Twentysomething, the two swing tunes on that record, that was 20% of my output and I was as interested in songwriting, I've always as interested in pop. I looked at swing tunes more as just great songwriting. I thought there's an era where you had the greatest songwriters, the greatest arrangers and the greatest singers, and they all knew their place and they got on with it and they made some of the greatest music we are ever likely to hear.  I loved swing, but I never saw it as a revival of anything, it was just the music that I liked in the same way I loved a lot of  I think because I brought an attitude of a young person's, not an old person. I never tried to pretend we live in the fifties.  I live here and now, I like living here and now, I  love Beyonce, but I also love Chet Baker and Frank Sinatra.

Johnny - That's it. I often wonder with many pianists around playing virtually the same classic songbook as you, how come you got to be successful? Believe me, I ask the question once, they ask the question every night as they go back to their flats from Pizza Express. 'Why did he get the break? Is there room for only one?'

Jamie - I felt like that too, a lot of guilt because I knew a lot of the people doing similar things to me.

Jamie - I'm definitely not tall! It was a lot of luck, right place at the right time. I was also mixing up the repertoire.  You wouldn't come to my gigs and and just see me me playing a catalogue of Gershwin, Cole Porter and Rodgers and Hart. You could hear my own songs that had real contemporary references, you'd hear my own songs that had references from the past, you could hear Radiohead, Hendrix, it was a combination that could only happen in the early 2000's. You definitely couldn't have flicked a switch and be back in the fifties. There was no part of it that was a retro act.
(clip of Photograph)

Johnny - It's been ten years since Pointless Nostalgic came out. Are more people getting into their swing music or is it declining?

Jamie - Oh no, Michael Buble has proved that model for doing straight forward swing, doing it properly with the big band and the suits, the production, the razzamataz. He's one of the biggest selling artists in the world now and there's an audience for it now a lot more than when I released Pointless Nostalgic.  I love that music and I've learnt so much from it, but I will always be someone who dips into that world and write songs. I think what's great is that the sound of that  music is ringing in everyone's ears now and those idols are held up in great esteem.

Jamie - I don't know how you can improve on the Capitol Studio's era of Sinatra for example. That was the most current style of music at that point. You had the best musicians, everyone was being funded properly, you only did albums in studios with musicians, there was nothing programmed, so everything was at it's best, and everything was happening there and then. I think it would definitely hard to beat that.

Johnny - So what you're aiming to do is new standards, by modern standards.

Jamie - I'm just trying to make a living making music! I don't know what I'm trying to do when it comes to standards. All I know is that when I hear a beautiful standard that I'm not as familar with, the first thing I want to do is go to a piano and work it out and sing it. It doesn't matter if that's in  front of an audience or on my own, that music, the way it's played, the way it's sung, the way the chords fit together, the way the lyrics tell a story, there is something about it that will keep me coming back to it till the day I die. Whether I will continue just writing songs, whether I just do pop music, I don't know, that will always draw me back to it because it is classic, something you can't bottle, it's perfect. Beautiful perfect music.

Johnny - Jamie Cullum, thankyou so much for coming in. I've got down here you ended 2003 as the biggest selling UK jazz artist of all time.

Jamie - Ah, it's all PR rubbish though isn't it, that's if you think my album was all a jazz album, some people would say only a bit of it is jazz and not the rest of it.  You know, it was a really successful album and it's given me wings to go all over the world and play music for a living, so I'm very lucky.
(clip of Singing in the Rain)
Posted by Unknown at 17:35