On BBC iPlayer this week (BBC4), you can see a programme called ...Sings the Great American Songbook. It features Jamie Cullum's 2004 Parkinson performance of I Get A Kick Out of You. 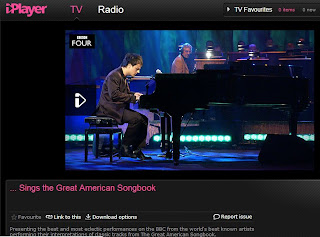 Presenting the best and most eclectic performances on the BBC from the world's best known artists performing their interpretations of classic tracks from The Great American Songbook.
In chronological order this programme takes us through a myriad of BBC studio performances from Dame Shirley Bassey in 1966 performing The Lady is A Tramp to Bryan Ferry in 1974 on Twiggy's BBC primetime show performing Smoke Gets in Your Eyes to Captain Sensible on Top of the Pops in 1982 with his number 1 hit version of Happy Talk through to Kirsty MacColl singing Miss Otis Regrets in 1994 to Jamie Cullum with his version of I Get a Kick Out Of You on Parkinson in 2004 and bang up to date with Brit winner Florence from Florence and the Machine performing My Baby Just Cares for Me with Jools Holland on his Annual Hootenanny at the end of 2009.
The Great American Songbook can best be described as the music and popular songs of the famous and prolific American composers of the 1920s and onwards. Composers such as Cole Porter, Irving Berlin, Johnny Mercer, Harold Arlen, Rodgers and Hammerstein and Hoagy Carmichael to name but a few... songwriters who wrote the tunes of Broadway theatre and Hollywood musicals that earned enduring popularity before the dawning of rock n roll.
These famous songwriters have penned songs which have entered the general consciousness and which are now best described as standards - tunes which every musician and singer aspires to include in their repertoire.