The View From Here - Kyle Eastwood

Further to my previous post, here is the press release for the upcoming new album from Kyle Eastwood, due for release next month. 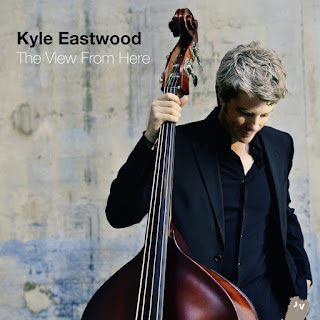 “There’s no denying Kyle has imagination and skill”
The Observer

In March 2013, Kyle Eastwood will release The View From Here, a brand new album of original compositions that embrace a musical heritage enriched by the varied soundtrack of his youth. Dynamic and bursting with powerful grooves and innovative melodies, the album presents the eclectic music of a band leader, virtuoso instrumentalist and composer who has forged a path as one of the leading artists in his field.

As the eldest son of actor and director Clint Eastwood, Kyle grew up surrounded by music. His father had been attending the Monterey Jazz Festival since it began in 1958 and when his children were born it became a yearly family outing. Being the son of one of the most famous men in the world gave Kyle immediate access backstage to meet huge jazz stars who were performing at that time such as Dizzy Gillespie, Ella Fitzgerald and Sarah Vaughan and it wasn’t long before he’d fallen in love with the genre and a career as a jazz musician beckoned.

Today, Kyle Eastwood is less commonly referred to as the son of Clint and more as a universally respected musician and band leader in his own right. As well as being a virtuoso bassist on electric and upright Kyle is also an acclaimed composer who has contributed music to eight of his father’s films including Mystic River, Million Dollar Baby and Gran Torino.

On The View From Here, Kyle has affirmed his love for all things French by bringing his loyal band of eager young Brits to record at La Buissonne, one of France’s best modern studios. His music resonates with swing and funk overtones and as Kyle puts it “my roots remain in jazz but I like adding all kinds of different flavours”. Kyle has toured extensively around the world and will be embarking on a tour of the UK in May and June 2013.

Email ThisBlogThis!Share to TwitterShare to FacebookShare to Pinterest
Labels: Kyle Eastwood, The View From Here